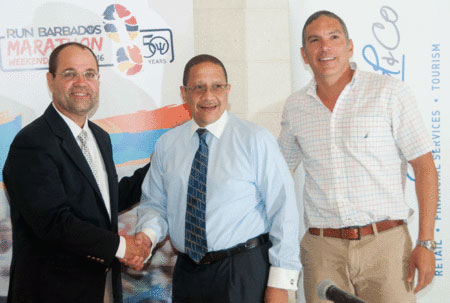 The Run Barbados Marathon Weekend has been endorsed by one of the island’s most recognizable companies, Cave Shepherd. Chief executive officer of the Cave Shepherd Group of Companies, John Williams, described the Run Barbados event, like Cave Shepherd, as a “Barbadian institution” and pledged his company’s commitment in a three-year partnership agreement with the Barbados Tourism Marketing Inc (BTMI).“As a group, we were seeking out an event where all of our associated businesses could come together and participate and we found it in the Run Barbados Marathon Weekend,” said Williams, speaking yesterday at the event launch at Tamarind Cove Hotel, St James. The race calendar now features the Cave Shepherd & Co. Marathon; the Fortress Half Marathon; the Colombian Emeralds International 10K; the Cave Shepherd Card 5K; the Signia Fun Mile and the Ganzee 5K Walk For Charity.