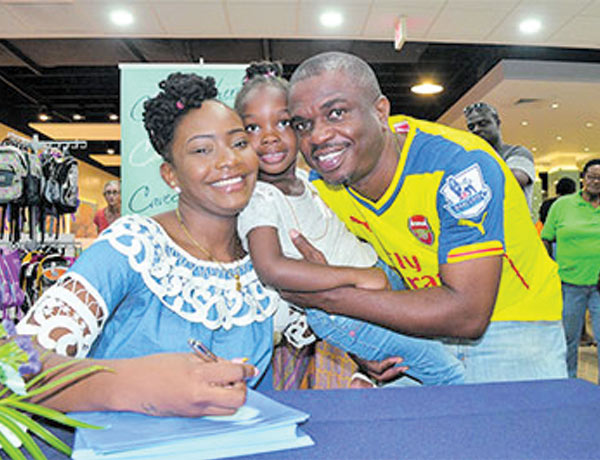 ALL EYES were on the 2016 MQI/Mount Gay Pic-O-De-Crop calypso monarch, 21-year-old Aziza Clarke, during an appearance at the home of her tent sponsors Cave Shepherd, Broad Street, for an autograph-signing yesterday.

Clarke wrote her name on history’s page when she became the youngest competitor to win the Pic-O-De-Crop competition. She did it with the songs One People, One Nation and Bring Back Respect and also added her name next to Rita’s as the first woman to win the crown since 1988.

She was surrounded by fellow Cave Shepherd All Stars calypso tent colleagues, including manager Eleanor Rice-Watkins, calypsonians Ronnie De Announcer Clarke and Donella, who both raised their voices in song.

Aziza also serenaded fans with One People One Nation after the signing ceremony. (TG)

Aziza signing an autograph while posing for a picture with Shawn and Anya Scott.