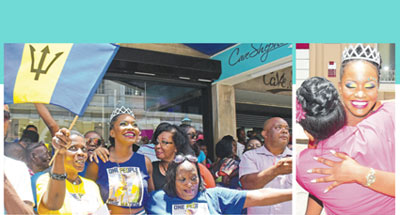 Here, Aziza mingling with some of her fans and supporters outside Cave Shepherd, Broad Street. (Picture by Sandy Pitt.) QUEEN AZIZA being hugged by a well-wisher.

IN FINE BARBADIAN style, officials of the Cave Shepherd All Stars calypso tent yesterday held a coronation fit for Queen Aziza, the 2016 calypso queen.
She was resplendent in national colours, as she rode on the back of a van for her victory parade, which began at the Barbados Investment and Development Corporation, Princess Alice Highway, through The City and on to St Philip. Queen Aziza said she “was honoured to be celebrated in this fashion and to be crowned as the first queen after 28 years on such a historic occasion as the 50th anniversary of the nation’s Independence.”

IN THE FACE of adversity, always remain positive.

This was the advice of this year’s Pic-O-De-Crop queen Aziza. She was speaking yesterday at the start of a motorcade held in her honour from Bridgetown to King George V Memorial Park, St Philip.

Aziza, responding to controversial comments by fellow calypso artiste Terencia TC Coward Thompson after the competition, said: “I heard about the voice note, but I did not listen. That’s just me. I don’t follow on to negatively. I try to stay as positive as possible, and when I heard about it I didn’t pay it any attention at all.”
The first stop on the motorcade was at Cave Shepherd, Broad Street, where the 21-year-old paused to take pictures with fans and sign autographs, as her winning song One Nation, One People played in the background, forcing many to dance to the rhythmic strains.

“I feel great today,” she said. “I am excited and happy that my tent manager Eleanor Rice organised this motorcade in my honour. I’ve never had one before, so it’s truly exciting.

“It’s also an honour to be queen after 28 years, and to be crowned at such a historic moment as the 50th anniversary of this nation’s Independence; I am very grateful and happy.”

The young resident of Bonnetts, Brittons Hill has plans of joining a band “soon”. “I want to continue to sing and would ideally like to get into a band. I am not sure as to what type of band it would be because I do different genres of music, so I can’t say if I would stick to calypso or branch off into R&B,” she said. (RA).