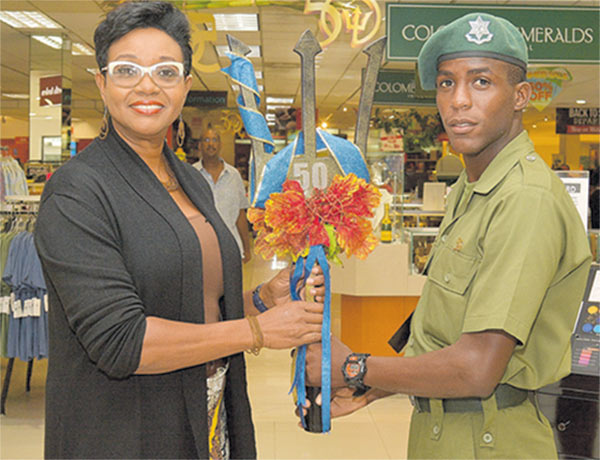 HUNDREDS OF LOCALS and tourists flocked to Cave Shepherd and Co. Ltd, Broad Street, earlier this week to sign the Commemorative Tribute book and create their own memories with the commemorative Broken Trident.

Location manager Andrew Wilkinson said he was happy to have the store play its part in the island’s 50th anniversary celebrations, adding it was a “big deal” for them as the store celebrated its 109th year in business in November as well.

“I think it is a great opportunity for Cave Shepherd to be associated with the 50th anniversary of Barbados. It goes along with our tradition that is supporting local and supporting the industry.

“This is also our celebratory year and it goes well with all the celebrations that we have coming up now for November 30,” he said.

Many people were seen popping in and out of the store, taking selfies with the Broken Trident which was under the watchful eye of Private Chad Howell of the Barbados Defence Force for its seven-hour stay at the city department store. (RA)